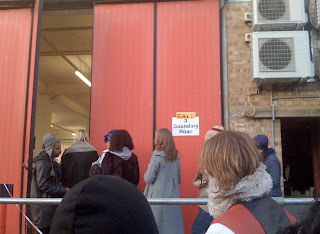 I went to the Angels Vintage Sale in London to shop for my play that is moving to Broadway.
It started at 9 AM in an industrial park in Wembley and I was so excited (and nervous I wouldn't wake with the alarm) that I woke at 3 AM. I arrived at the warehouse at 6:45 AM and I could see the front door so I felt pretty good. I also had a really great group of people ahead of me including Cherine, a schoolteacher and another costume designer. 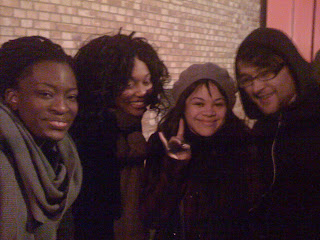 Some people had waited all night long and brought sleeping bags and chairs. It was really cold and I'm glad I brought my hand warmers.
It would have been nice to get an advance peek or get VIP status, being a costume designer and all, as well as traveling all the way from New York City. Instead I was told that I would be disappointed by the sale and that it was not for professional designers.
The good news is that I found loads of 1940's dresses and about 5 coats and that's not including the military coat I will be needing for the play.
I bought lots of bags and headed straight back to the 1920-50's and for the first 15 minutes I was actually able to grab wardrobe that looked decent. I had no time to measure anything and most of the boxes were not labeled at all. They had "sorted" written in magic marker. Good thing I know the difference between 1930's and 1940's!
Once I had about 18 bags filled and the room filled up to capacity I decided I'd better look at the military uniforms. There were loads of uniforms, but by 9:30 each room was packed.
The guards said they would let blocks of people in to shop but people were being let in continuously until it became one big giant push and I could not move at all. That's when I began to feel sick and claustrophobic.
Outside again I felt completely relieved but had no idea what I had grabbed, but back in my hotel room after sorting my piles, I felt great. It was so worth it!
Most of the items need cleaning and mending but they'll work for my play and it was an amazing adventure.
You can read more and see the video at www.stylebubble.typepad.com
If you see Susie's video I'm wearing the mad bomber hat at the front of the line... so you can see the back of me for a quick second.
Posted by Unknown at 4:46 PM

I saw your work of handmade handbags on stylist.com and I had to come let you know your so talented.

I love your work.

It is classy yet suttle.

I really did the work and all the hard work you put in.

Hope you go as far as you dream.

Thank you so much!
I really appreciate your comment
on Stylelist as well as here on my blog.
It's always wonderful to get positive feedback.
Best,
Astrid